From 26th to 28th of May 2004 a course on arthroscopy and arthroplasty of the brachial joint took place in Nice. Professor Pascal Boileau, the chief of the Orthopaedic and Sport Traumatology Department of the de l’Archet Hospital in Nice organized the workshops and was, at the same time, the life of the undertaking. The course was organized under the patronage of the French Arthroscopy Society. The organizers managed to invite to the cooperation the best specialists from the whole world. The lecturers from the United States of America, Germany, Great Britain, Italy, Sweden, Switzerland, the Netherlands, Southern Africa and France, certainly, came to provide the lectures. This “dream team” provided lectures, trained and discussed various topics from early hours till very evening.

Morning sessions of lectures were supplemented with practical classes, in the afternoon, during which the participants were able to practise new techniques on phantoms and to watch the most interesting surgeries performed live in the de l’Archet hospital. 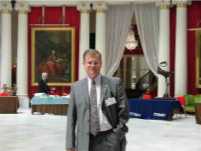 Nice, the capital of the region, is a town of a unique character and one of the most important towns of the French Riviera. It also gave the participants a beautiful sun together with invigorating breath of air from the Mediterranean Sea. The lectures and classes took place in the Negrasco hotel, constructed at the beginning of 20th century, at the representative Promenade des Anglaise. The windows of lecture rooms overlooked the sea coast permitting to observe the sea, which was a kind of relief for the eyes and the minds working at full capacity.

The presentation of all 23 national groups participating in the course was an immensely nice gesture of the sessions. Our Polish participation was featured by Piotr Kolasiński, M.D. His participation allowed him to acquaint himself with the latest surgical technologies in terms of arthroscopy and endoprotesoplasty of the brachial joint. The invited lecturers presented the latest world achievements in this discipline as well as they sketched the trends, which modern orthopaedics will be heading to.

We hope that Piotr Kolasiński, M.D., will apply at least a part of these novelties in our clinic.