Thursday 4 December 2008 saw the 2008 Success of the Year Awards in Health Protection – Medicine Leaders hosted in the magnificent gala style at the Royal Castle in Warsaw. This prestigious plebiscite was organized by Termedia Publishing House, whereas the honors were given by Ewa Kopacz, Minister of Health. The Awards categories this year were e.g Private Healthcare Clinics and Dr Jerzy Kolasiński won the Manager of the Year 2008 in this category. His uniterrupted 24-year-long medical seniority was recognized by the contest jury. However, as the prizewinner says, ‘the success is the success of the entire Kolasinski Clinic team. 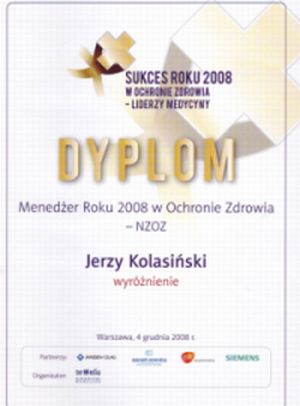