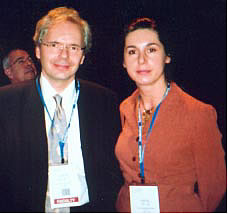 From 19th to 21st of March 2004, 2nd Anti-Aging Word Conference took place in Paris again. This very interesting scientific event was organized by the European School of Anti-Aging Medicine. A lot of specialists in internal medicine, endocrinology, dermatology, cosmetology and surgery from the whole world participated in the conference. The lectures concerned the issues connected with anti-aging medicine, such as the causes of aging of a human body and developing various illnesses depending on the age. Also the topics of modern diagnostic and therapy were discussed.A lot of prominent specialists in anti-aging medicine such as Christophe de Jaeger, Antoine Lorcy, Maurice Tubiana, Luc Montagnier, Michael Klentze, Alfred Wolf (the author of Bio-Aging system) from Germany and Ronald Klatz (the President of the American School of Anti-Aging Medicine) participated in the conference. Anna Modelska – Żiółkiewicz, M.D., from Hair Clinic Poznań was one of the participants of the congress. Her stay in Paris allowed her to not only broaden her knowledge in this field of medicine but also to meet the partners from Germany or Switzerland with whom she worked on the Polish version of BIOAGING system. The introduction and implementation of the new version of the program was the final effect of these meetings.During the conference Ms. Modelska was elected the Polish delegate in the European Association of Anti-Aging Medicine. She received many invitations to visit some European clinics dealing with this field of medicine. Soon, she will be a guest of the clinics in Ulm and Munich.Anti-aging medicine is actually the fastest developing field of medicine. The next world conference was planned today and it will take place in Monte Carlo in 2005. In April next year the Anti-Aging congress is to be organized in Poland for the first time. Hair Clinic Poznań is one of the organizers of the conference.