Probably all surgeons dealing with the treatment of hair reconstruction associate March with the workshops in Orlando. This time it was a very unique event due to its 10th anniversary! The public was also a record-breaking as more than 120 people including teachers, novice physicians, nurses and assistants participated in the workshops. The first day of the session concerned those least experienced. All basic issues connected with hair transplantation were presented methodically on that day. Morning sessions, as usually, in comfortable conference rooms of Wyndham Palace and afternoon surgery workshops in Metro West Surgical Center took place the following days. The main advantage of such meetings is their direct character. Numerous discussions allow for views exchange as well as very detailed presentations of all the issues discussed. If the theory is so clearly supported by practical workshops with the participation of real patients and numerous surgeries, during which all the latest surgical techniques are presented, the value of such a meeting is even higher. 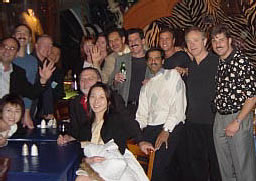 Dr Jerzy Kolasiński has been joining the teachers staff for many years also this year he has done it. During the lecture and next in the operating room he presented the advantages of the latest technique of hair transplantation called four-hand-stick-and-place. During the following days he presented the results of his research conducted during the last-year workshops which concerned the usability of, debri tissue, in hair reconstruction surgeries. On the last day he hold the session concerning the treatment of scars on the head. In his paper he proposed the procedures of dealing with various hairy skin loss on the head. His performance was warmly welcomed by the participants of the conference. The organizers of the workshops also took care of leisure time. As the workshops are organized in Orlando, which happens to be one of the American entertainment centers , there was a very elegant and formal banquet at the summit in Wyndham Palace as well as a rock party in Planet Hollywood Adventure,s Room. So, not only did the participants take home new experience with them, but also great memories.