Why to perform the inframammary fold incision?

Breast augmentation using breast implants is currently the most frequently performed surgical procedure in esthetic surgery. In 2010 there were more than 318 thousand such surgeries performed in the USA alone. One of the most frequent surgical complication is connected with the development of a fibrous capsule around the implant. According to different research papers, the capsule is formed at 4-5% of the patients within the first two years after the surgery. Over a few dozen years the risk applies to around 7% of the patients with breast implants. Although the reason for developing fibrous capsules around implants is not precisely explained, still there exist numerous factors which may bring about the formation of capsules. Apparently innocent contact of the implant surface with Staphylococcus epidermidis, which occur naturally on the human skin, seems to be one of the reasons. However, there are some regions on the human body where the bacterial colonization is higher, which, in turn, increases the risk of developing the capsule around a breast implant. This phenomenon was described by doctor Jeffrey M. Jacobson in the article published in the May issue of Aesthetic Surgery Journal 2012. He noticed the importance of the surgical incision through which a breast implant is inserted in the process of developing the capsule around such an implant. His research also proved that in the case of the inframammary fold incision, such a complication occurs at only 0.5% of the patients, whereas if the incision is made around the breast aureole, the risk of the capsule formation increases to 2.4%, and as far as the cut around the armpit is concerned, up to 6.4%! So, the risk of developing the capsule around the implant is 13 times higher in the case of the incision around the armpit and 5 times higher in the incision made around the breast aureole. The reason for the higher capsule incidence in the case of incisions made around the armpit and breast aureole is, according to Dr Jacobson, the increased contact of the implant surface with Staphyloccocus epidermidis. Their presence in the milk ducts of the mammary gland as well as in the ducts of sweat glands in the armpit constitute a real threat for the implants inserted to enlarge breast. Additionally, there exist many other factors increasing the risk of developing the capsule around the breast implant such as: implant location or its surface – says doctor Jacobson. Both in his research and in other reports it is emphasized that a textured surface of implants and their location under the breast muscle as in the Dual Plane procedure may decrease the formation of the capsule.

The influence of incision location on the risk of developing a fibrous capsule around a breast implant: 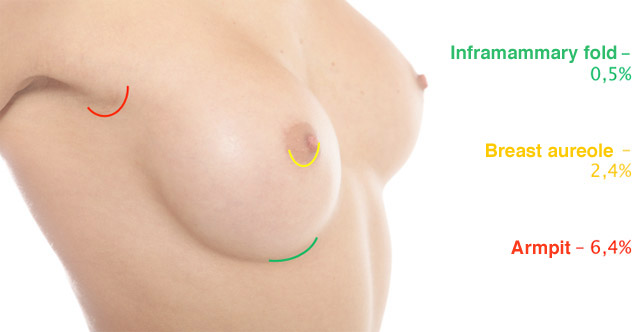 Fibrous capsule around a breast implant: 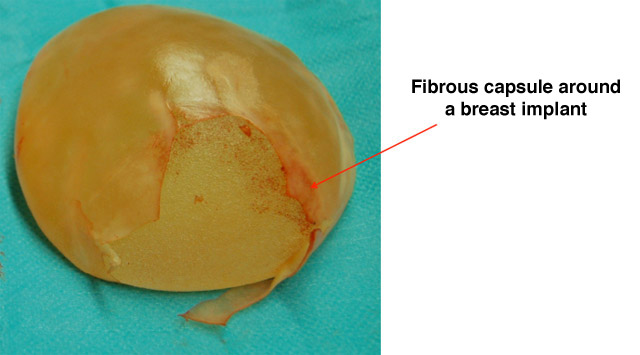 Even though there still exist some favorable locations for surgical incisions in breast augmentation surgeries, the fact of lower risk of this complication and the application of inframammary fold incision constitute a big argument in favor this type of the surgical cut.

Based on: „Effect of Incision Choice on Outcomes in Primary Breast Augmentation”, Jeffrey M.Jacobson, MD i wsp., Aesthetic Surgery Journal 32(4) 456-462, 2012